Recently, there have been different information about alternate effective ways to heal your body and mind. One of these is using chakras, which has brought about a lot of discussions. The debate is going on about whether chakras are real and whether science can prove the existence of chakras.

Well, it is understandable that you would wonder if they are real or simply conceptual. Everyone wants some form of evidence to prove that they are there and that they can be used in healing your body and mind.

So, are chakras real or conceptual? We will be discussing this question in this post. Read on for more insight on the matter.

The Traditional Concept of Chakras 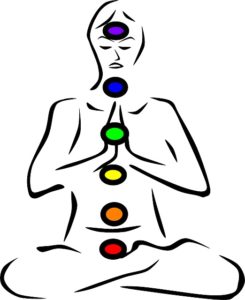 Where did this concept come from? You might have heard chakras and associated them with monks of China, or Hindu Tantriks. So, who invented chakras?

According to history, both Buddhists and Hindus played different roles in helping understand chakras and how they are used. The earliest evidence of chakras goes back around 600 BC in a Hindu scripture of the Vedas. The text connected chakras with yoga teachings, which is one of the reasons why it has such an impact on the world.

It is only later that the use of chakras was noticed in Buddhism.

In the traditional chakra concept, the physical body was seen as separate from a subtle body, which contains energy. In this concept, chakras acted as the energy nodes which had energy channels running through them.

In Buddhism, there are four chakras, while in Hinduism, you will notice seven. These are points that are aligned from the head to the body vertically. These are the crown, third-eye chakra, throat, heart, navel, the root of sexual organs, as well as the base of the spine.

In Hinduism, each chakra is associated with a certain deity, while in Buddhism, they match the noble truths.

There is a new age interpretation, which adds some colors. These colors range from violet, which is at the crown, to red, which is at the spine base. They are also believed to spin constantly while drawing life energy to create a certain spiritual, emotional, physical, and mental balance.

So, are they Real or Conceptual?

There is no scientific evidence that supports their existence. Regardless, scientists note that they correspond to certain parts of the body, mainly the body’s nervous system.

Additionally, no scientific evidence can prove that treatments based on chakras work. Even so, most people who give them a try have seen certain benefits of using the chakras.

The truth is, you cannot measure chakras, mainly because they are more about feelings and emotions, and are not as physical as most people assume. Once you focus on the energy points, they synchronize with your physical being, which is when you get the desired results.

While the origins of chakra theory are unclear, the first recorded mention of chakras is found in the Vedas, a collection of ancient Indian texts. In the Vedas, chakras are described as “wheels of light” that spin at different speeds, depending on a person’s state of consciousness. While the concept of chakras was initially associated with Hinduism, it eventually spread to other traditions, such as Buddhism and Jainism.

Today, chakra theory is practiced by many people around the world, regardless of their religious beliefs. While there is still much disagreement about the exact nature of chakras, they continue to be a source of fascination and inspiration for both scientists and spiritual seekers alike.

Chakras are often described as being like spinning wheels of energy, and they are said to be located along the spine. There are seven main chakras, each associated with a different color and type of energy. While there is no scientific evidence to support the existence of chakras, some people believe that they can be measured by taking into account factors such as body temperature, pulse, and electrical conductivity.

Others believe that chakras can be seen using aura or Kirlian photography. However, these methods have not been proven to be accurate. In addition, there is no consensus on what the exact location of each chakra should be. As a result, it is difficult to say for sure whether or not chakras can be measured.

Are chakras real or conceptual? Even though you cannot prove the existence of chakras scientifically, you should not be quick to disapprove of them. That is mainly because even though you cannot measure or see these energy points, they exist in your mind once you evoke them, you will get adequate power for healing different aspects of yourself.