For most of human existence, people have paid respect to the dead in different ways. There are different ways of doing that in different cultures. In Buddhism, for instance, there is something called Koden, which, in the past, meant burning incense as an offering. The meaning might change.

You will see people burning incense during funerals, even though it is not practiced in all cultures. You might wonder what it means when incense is burned in such situations. Also, how many incenses sticks to burn for the dead?

We have done all the necessary research and have come up with this brief post. We will talk about the incense that is related to death. Let’s get started.

Why do we Burn Incense for the Dead? 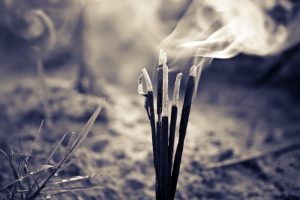 In traditional practices, for instance, incense was only used for the dead to prevent the smell produced by decomposition. It was mainly done during the warmer seasons such as summer.

In Christianity, incense is burned at the casket at the cemetery and in Church. It is among the oldest practices in which incense is used for the dead. Its smoke symbolizes the ascension of the deceased’s soul to heaven. But that is not the only reason. In some cases, it signifies prayers by other believers rising to God for the deceased person. It is also a sign of respect. Since it was the Holy Spirit’s dwelling, it has to be respected in death too.

For Buddhism, burning incense has two reasons. First, it will cam the deceased’s spirit. Secondly, it will ensure that the individuals and the surroundings are purified.

How many Incense Sticks to Burn for the Dead?

To pay respect to the dead, around five or seven sticks were preferred. It was strongly believed that an odd number is the best to burn. The maximum is 108 sticks.

What Incense is used at Funerals? 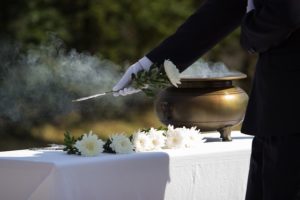 The first thing you should know is that there is no specific incense or blend that you should use. However, there are two main common types of incense used during such rituals and occasions.

The most common is frankincense. It is mainly used because it was offered to Baby Jesus. It is obtained from different places such as Ethiopia from the Balsam trees.

The second type is Myrrh obtained from the Middle East. Its purpose extends even to the sick. It is used as oil when it comes to the sick.

In Egyptian traditions, there were many types of incense used in mummification processes. During such processes, cedar, pine, myrrh, frankincense, cinnamon, and juniper were mostly used.

It is important to honor the dead, which is why it is a part of religions and traditional practices. As you have seen, there were many varieties of incense used to respect the dead.