Last Updated on September 23, 2022 by IncenseJunction

Since the beginning of time, incense has been used by all great civilizations across the globe. From the Sumerian and Babylonian cultures, who used resins of aromatic trees in their religious ceremonies, to the great Pharaohs, who burned incense to drive away demons and gratify the presence of the gods, and all the way to the Japanese samurai warriors, who would perfume their armors and helmets with incense smoke to achieve the aura of invincibility, the raw scents of aromatic plants and resins were regarded with a sense of great respect and spirituality.

Even today, in Japan, there is a strong relationship between nature, incense, poetry, and the human spirit.

But what exactly is incense? How exactly does the beautiful alchemy of extracting the sweet aromas from the plants work? Well, incense is composed of aromatic plant materials – tree resins, tree bark, leaves, stems, roots, or even seeds. These are often combined with essential oils, also extracted from various plants (please read the page on essential oils for more information).

The form in which the incense is used is different according to culture, purpose (religious or not), geography, but also time frame, as the advances in technology have brought changes in the way incense was used.

The two most important categories are “direct burning” and “indirect burning” incense. Indirect burning incense is not capable of burning on its own, as it needs a separate heat source. In contact with the heat source, the incense releases its fragrance. Today, this type of incense is mostly used in religious ceremonies throughout the Christian world, but also in oriental religions like Buddhism.

Direct burning incense, on the other hand, is lit up by a flame and then fanned out, leaving a glowing ember that releases the fragrance along with the smoke. This kind of incense comes in several forms, including incense sticks, cones, and pyramids.

It is composed of natural solid aromatics and a combustible base that enables it to burn with a self-sustained ember, which propagates slowly and evenly through an entire piece of incense with such regularity that it can be used to mark time.

When people think of incense, they usually imagine something that smells nice but also brings about some sort of spiritual experience. There are plenty of different types of incense out there, so what makes each one unique?

First off, let’s talk about the main purpose behind using incense: to improve your mood and relax you. It has been shown through studies that you can use aromatherapy to relieve stress and anxiety, so it’s no surprise that so many people turn to incense to help them calm down when things get tense.

That said, it’s not always just about calming your nerves. Some kinds of incense can be used to bring about other benefits too. For example, lavender oil is an excellent natural sleep aid, and sandalwood essential oils are known to promote better sleep quality and reduce pain during restful sleeping.

What is incense made of?

Now, we’ve talked all about the purpose of incense, but what does it really consist of? Well, the answer is pretty simple: It consists of a mixture of essential oils, aromatic compounds, resins (which are organic substances), and sometimes herbs and flowers. The most common ingredients include frankincense, myrrh, cinnamon, patchouli, cassia, cedar wood, and sandalwood.

You might be wondering where the name “incense” comes from if the word “frankincense” sounds familiar. Well, Frankincense was originally a reference to the biblical patriarch Abraham, who was blessed by God after offering his son Isaac as a sacrifice. This story goes back thousands of years before Jesus’ birth, so it’s no wonder that Abraham’s name was later associated with the precious resin produced by trees found in the region of modern-day Saudi Arabia.

Side effects of incense

Before we move on, you should know that there are some potential side effects related to using incense. One major concern is that incense smoke can contain various carcinogens such as benzene, which can cause cancer, as well as formaldehyde, which can irritate the eyes, skin, respiratory system, and nervous system. Because of this, you should avoid inhaling any smoke produced by incense, including the aroma itself. Additionally, there are concerns that smoke can cause respiratory problems, especially in those who already suffer from allergies or asthma.

However, there are some benefits that come with using incense. First of all, it can help stimulate the senses, allowing you to enjoy the aroma while simultaneously relaxing you. Second, it can potentially help with memory retention, as long as you don’t overdo it. Thirdly, it can help boost your energy levels, since it contains caffeine derivatives. Lastly, it can even help with weight loss, due to its ability to suppress appetite and increase metabolism.

How do you pray with incense?

As mentioned earlier, incense is commonly used as a way to meditate and connect with the divine. However, there are also numerous religious practices that involve the burning of incense. You may want to try this out if you’re looking to deepen your faith and learn more about your religion. Here are some examples of prayer with incense:

Blessing incense is burned in Jewish temples for both practical and ceremonial purposes. It’s typically used in times of joy or sorrow, as well as to mark important occasions, such as weddings, funerals, and bar mitzvahs.

Buddhists do not typically pray with incense, but they do use it to symbolize purity, peace, and compassion. When they use incense, Buddhists place it near their bedside so it can give them good dreams and keep away nightmares.

Vodou practitioners often burn incense during ceremonies to honor their ancestors, as well as to protect themselves against harm.

Muslims do pray with incense, although it’s not necessarily used during prayers. Instead, they use it to ward off evil spirits and bad luck. In addition, incense is burned during Ramadan to purify the body and mind during fasting.

Should I burn incense in my room? 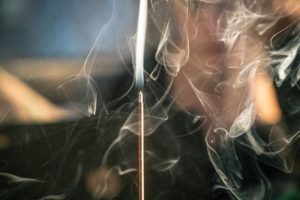 Yes! As a rule of thumb, you should only burn incense in the living room or outdoors, unless otherwise instructed. While it is safe to breathe in incense, you shouldn’t inhale it directly into your lungs because it will likely irritate your throat and cause coughing fits. If you feel like you need to clear your sinuses, simply open a window for a few minutes and then close it again.

The same goes for children. They should never inhale incense fumes, and if you absolutely must light up a stick or two, make sure that they’re far enough away from your face that they won’t accidentally touch your nose, mouth, or eyes.

How often should you use incense?

In general, you don’t have to burn incense every single day. It can be used whenever needed, depending on what kind of feeling you’re trying to achieve.

It’s important to note that incense isn’t considered to be a type of drug. It doesn’t alter your mental state, nor does it produce any psychotropic effects. Therefore, you won’t start hallucinating or feel high after you inhale the fragrance. In fact, if you do inhale it too much, you could end up experiencing physical withdrawal symptoms, including nausea, headaches, dizziness, and insomnia.

To read Next: What is Resin Incense? How To Burn it