Incense is a very important part of Buddhist culture. The burning of incense in Buddhist temples is always practiced. When most people hear about incense, they will most likely associate it with Buddhist temples.

What type of incense do Buddhists use? Well, we have conducted extensive research to try and figure out what kind of incense is used in Buddhist temples. We will also discuss the types of ingredients used in the incense, as well as the kind of fragrance they produced. Let’s get started.

Which Incense is used in Buddhist Temples?

The act of burning incense has continued for centuries in Buddhist countries. As you know, there are many types of incense. That means that they are presented in different forms including cones, coils, and sticks. There are also very many forms of fragrances that you can choose from.

When you consider the fragrance, for Buddhists, sandalwood is among the most preferred fragrances for religious purposes. Aloeswood/agarwood is also highly used in temples in Japan.

The solid or coreless incense sticks tend to burn for longer, even though the bamboo core sticks are preferred and used most.

When it comes to the quality of incense, the Tibetan sticks are known to be the best. That is mainly because the ingredients used in making them are completely natural flowers, seeds, and herbs. There is a wide variety of ingredients that are used for making Tibetan incense sticks. However, none of the ingredients used are synthetic.

Why Buddhists use Incense 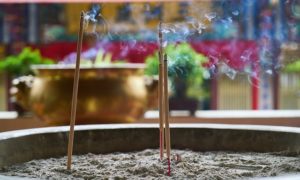 Buddhists strongly believe that incense acts as a divine odor. The fragrance produced is supposed to call on the divinities and request their presence. At the same time, the use of incense works perfectly to cleanse and sanctify the space around.

But that is not all. The use of incense in temples is meant to help create a sanctified and peaceful space. The forms of incense used by Buddhists help to reduce stress and anxiety. People in a Buddhist temple are therefore completely present.

You will find different forms of incense used in temples. Some are preferred over others. In most temples, you will find charcoal or wood incense also used. However, Sandalwood is the most popular and preferred fragrance for Buddhists.